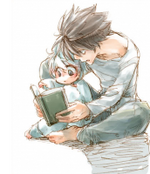 The Inheriting Cloud; One Who Sees Only His Own Reality...OR The Violent Intent; One Who Covers Everything With Blood...

I'm very well happy to find this wikia. I admit i'm not much useful, still I can say i'm good ^_^...Correct that, I fail miserably.

The flame I love the most is Cloud, anything other than that is Mist, and if it is forbidden for Cloud users to have Mist Flames, I'd rather stick with Sun Flames...

Creating fictional stories is a hobby for me.

I am addicted to sakura!!! (Consider Revising)

I also like how Chrome names other characters so innocently.

I love drawing anime even though I'm still a beginner... But, yay! I finally drew Alaude!

Facts and Fiction (Other things about me) Edit

Discographies (Things that I discovered and liked) Edit

Retrieved from "https://reborn.fandom.com/wiki/User:Haliburton817?oldid=176194"
Community content is available under CC-BY-SA unless otherwise noted.