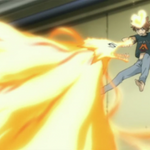 In short, I have an interest in anime/manga series in which the protagonist grows from a state of weakness into a character that wields a noble power. Granted this isn't to say they're flawless and always do what's right, but they try to most of the time. I enjoy writing and listening to movie, game, and anime soundtracks (my collection is growing rapidly). I should also note that I'm somewhat of a perfectionist - particularly when it comes to grammar and spelling. That would probably be my biggest contribution to any form of "wiki".

The following are some of, though certainly not all of my favorite series - just a quick list to get started with.

I'll certainly add more when I get the opportunity.

Retrieved from "https://reborn.fandom.com/wiki/User:Fenice_del_Cielo?oldid=164536"
Community content is available under CC-BY-SA unless otherwise noted.