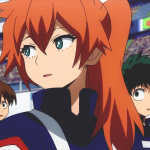 Hi! My name is Alexandra, but I prefer being called Aki. I edit wikis from time to time, trying to contribute with whatever I can. My activity on wikis isn't that exceptional since I prefer spending my time watching anime, playing games and making AMVs xD

Katekyo Hitman Reborn and I

Katekyo hitman reborn was recomended to me due to my preferance for shounen anime. I started watching it in April 2012 and I consider it one of my all time favorites. I like the fact that the main character is very clumsy and shy because there is enough room for improvement. Also, he is easier to relate to. Another thing I consider interesting about this anime is the special ability. Weather themed flames have a nice sound to them. I happen to like the Lighting Flame, that's why I used this template. I also like the Rain and Cloud Flames, but Lighting is my favorite for being the most unique looking and for its properties.

This anime doesn't have many songs that I especially like, however these are worth mentioning:

Retrieved from "https://reborn.fandom.com/wiki/User:AkiharaShizuka?oldid=122127"
Community content is available under CC-BY-SA unless otherwise noted.