The Prince of Star Arrives!

The Prince of Star Arrives! is the fifth volume of the Katekyo Hitman Reborn! series.

Tsuna meets a young boy named Futa who ranks people by their abilities. These skills attract several gangs, resulting in Tsuna saving him and becoming friends. One day, Dino organizes a snowball competition with Tsuna and all his friends, however, they all lose consciousness after using all their strength. Later, Reborn decides to train Yamamoto, who thinks that the Mafia is just a game, and is given a baseball bat that transforms into a sword when swung. Another day, Ryohei has a fight against a gang that causes problems in a dojo, but they are defeated by I-Pin who becomes a teenager by way of Lambo's bazooka. Lambo also turns into a teenager, whom Kyoko's friend tries to have a date with, but Lambo still retains his childish behavior.

Ryohei and Kyoko, a two page extra comic where Ryohei tells Kyoko he may be in love with the girl who defeated the dojo busters in chapter 40. He believes as such because he dreams of her, but is surprised because as he's sparring with her, her head changes into that of five-year-old I-Pin's. 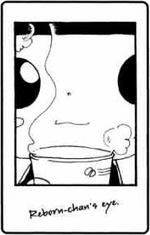 Haru: The first interview is with the super cute, Reborn-chan! He's drinking some espresso at the moment. Best regards!

Haru: To begin with, let's start with your birthday, height, and weight...

Reborn: A hitman does not reveal his information to others. It's a secret.

Haru: Hahiiii! We're in a pinch already! Er, the readers would like to know what kind your pistol is... 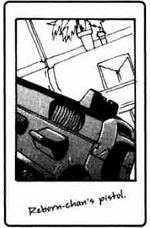 Reborn: Guess it can't be helped so I'll answer this time. This is my favorite pistol, the first CZ75 made in Czechoslovakia.

Haru: Ah! He's fallen asleep! T-thank you for your time!

Tsuna: What are you guys doing? 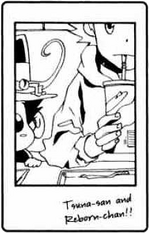 Haru: So, the second interview will be our own, Tsunayoshi Sawada-san! Tsuna-san is drinking cola right now.

Haru: It's Haru's job to ask everyone their profile!

Tsuna: Why do you have to do that? And it's another one of things with a weird name. 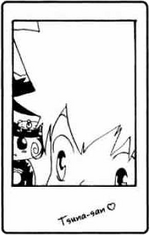 Haru: Not to worry! I'm fine! Let's start with Tsuna-san's birthday, which is a Libra on October 14!

Tsuna: You answered it yourself!

Haru: What is your blood type?

Haru: I thought so! Type A is always nice! Very fitting.♪

Tsuna: You believe in that kind of stuff...?

Haru: U-um, it's a profile after all, so please tell us your height and weight! 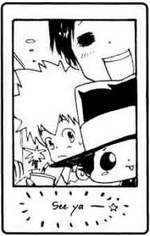 Tsuna: Why are you blushing? Can we go home now?

Haru: Ah! Please wait! I'm getting paid for this, so please come shopping with Haru!

Haru: I'll make you some delicious nikujaga! Then, let's meet again in interview 3 if there's some leftover space!