The Kokuyo Gang starts attacking the strongest students in Namimori High to lure out Tsuna. Hibari encounters the leader, Mukuro Rokudo, but is easily defeated. One of Mukuro's subordinates, Chikusa Kakimoto, finds Gokudera and fights against him. Despite sustaining major injuries, Chikusa attempts to kill Gokudera, but is stopped by Yamamoto. Tsuna is requested by the 9th Vongola boss to stop Mukuro, and he is joined by Reborn, Yamamoto, Gokudera and Bianchi. When they enter Kokuyo's territory, they are confronted by Ken Joshima, whom Yamamoto defeats. They are later attacked by other Kokukyo students who use their friends as hostages, but they are stopped by Dr. Shamal and I-Pin. They are then attacked, knocking out Yamamoto, by a person who is thought to be Mukuro. 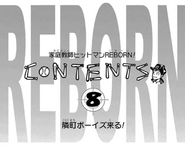 Tsuna: You promised to eat one at a time so you wouldn't choke, didn't you? If you don't take one out I won't let you play video games!

Haru: Hahi! Lambo-chan, don't put the candy in your pocket!

Tsuna: So that's it! Sometimes, a sweet smell comes from the laundry.

Haru: Now that you mention it, Lambo-chan always wears cute cow-print clothes, do you like them?

Lambo: These, you know, they have three hands! This one, and two more!

Tsuna: What Lambo means to say is that although his clothes always look the same, they have three different shapes of sleeves.

Tsuna: S, stop it! That doesn't make me happy at all!

Lambo: Lambo-san is five, and his blood is red soaking and a little green stripey! (??? idek)

Lambo: What's that? A weapon? A beam weapon? Can I touch it a little?

Lambo: Lambo-san will show this weapon to I-pin for a little! Just a little! Because we won't play! See you!

Tsuna: It can't be helped, I guess you'll have to come over and ask (Adult Lambo) his birthday and stuff again...

Haru: Really? As expected, Tsuna-san is kind! I love him!

Tsuna: Wha! What are you saying!

Haru: Haru will try hard on her test! Well then, see you next time!