Chrome: T-This is the... talk page for the article Doctor Shamal.
This space is for discussing changes to the page. Speculation is not allowed on our talk pages and all questions regarding the series should be directed to Reborn Answers, where all your questions will be answered.

Hypnosis: Although this was never shown in the series, it is known that Shamal knows some hypnosis as he erased Reborn's memories of his curse and made Reborn the way he is today.

I grow more and more skeptical and leary by the day. I know I put a citation tag on it, but considering all the other inaccuracies we've found and taken for granted as fact in the past... I'd like to clear this up if we can. Does anyone have a source for this? Because, I think this stems from Shamal helping... Reborn become who he is? Something like that. YazzyDream★ 06:38, June 6, 2019 (UTC)

I can't say I even recall the part where he erased Reborn's memories, let alone an actual verifiable source to back up the fact it was hypnosis per se but I'll go over Shamal's profiles in the extra books and his main chapters in the manga to see if there's anything. Should the info be taken out if no one can find anything? -Fox 12:48, June 6, 2019 (UTC)

Ok, this vaguely tickles my memory. But, I think something maybe like that was mentioned in the episode this image is from: 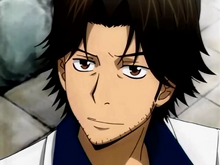 Ok from what I've been able to gather from a reddit thread and a crunchyroll forum it was in a filler arc (pretty sure the Arcobaleno Trials Arc and before episode 150) but it was never explicitly shown, it was just Reborn saying that Shamal helped him erase his past self but... I don't think he ever directly said he erased his memories, but more like he helped Reborn bury his past life after he finally accepted his new cursed body? Idk, but people have been a little confused by the wiki having the hypnosis section on his page apparently -Fox 10:04, June 7, 2019 (UTC)

Haaaa. Of course. I'm going to go ahead and remove it then. That's really interesting though, about how he helped Reborn erase his past. The wording is probably confusing, and can be interpreted in different ways. Thanks for looking, Fox! YazzyDream★ 18:22, June 7, 2019 (UTC)

Retrieved from "https://reborn.fandom.com/wiki/Talk:Doctor_Shamal?oldid=186356"
Community content is available under CC-BY-SA unless otherwise noted.