Shigure Soen Ryu (時雨蒼燕流, Shigure Souen Ryū?, lit. Shower in Late Autumn, Blue Swallow Style) is a dynamic sword art that increases incrementally as it is passed from master to student. It is also called as the "Invincible Sword Style". Shigure Soen Ryu is used by three people in the series — Takeshi Yamamoto, Tsuyoshi Yamamoto, and Superbia Squalo. The Shigure Kintoki is a special sword used by Takeshi in conjunction with the Shigure Soen Ryu.

The Shigure Soen Ryu originated from one man. Like a family tree, the technique grew as it was passed down. It is a tradition for a generation to add a new form to the Shigure Soen. This is a sword style that varies, depending on who your master was. Thus, there could be many different variations of the Shigure Soen Ryu.

The Shigure Soen Style is a notoriously deadly sword style that is only passed down to worthy successors. Each form of the style is only shown once to the student - if the student is worthy to succeed, he only needs to see it once to remember how to use it from then on. It originally only had one form that was passed down through generations of successors with each successor creating and adding their own forms resulting in many branches of Shigure Soen Ryu. However, as new forms were created, the weaker branches deteriorate, and others disappear as there is no worthy successor; hence, this style can be called the perfect, flawless style.

Takeshi Yamamoto used this alongside Rondine di Pioggia against Genkishi.

Sakamaku Ame (逆巻く雨, Sakamaku Ame?, lit. Rolling rain) is the defensive second form of the Shigure Soen Ryu. The user creates multiple waves of water around him and crouches whilst holding his sword vertically before himself as a method of defense.[2][3]

Takeshi Yamamoto used this against Superbia Squalo in the Rain Ring Battle. Takeshi obscures his body with a wall of water, while at the same time defending it with a contraction.

Yarazu no Ame (遣らずの雨, Yarazu no Ame?, lit. Last minute rain) is the offensive third form of the Shigure Soen Ryu. The user drops the Shigure Kintoki, kicking the base of the hilt with his foot to send it propelling towards the intended target.[4]

Takeshi Yamamoto used this to catch both Belphegor and Mammon off-guard. Takeshi drops the katana, kicking it with his foot, to send it flying in a stab.

Demon Spade once copied this technique against Yamamoto using one of his illusion clones.

Gofuu Juuu (五風十雨, Gofū Jūu?, lit. Windy once every five days, rainy once every ten days (a yojijukugo meaning favorable weather)) is the fourth defensive form of the Shigure Soen Ryu. The user synchronizes with their enemy's breathing to evade their attacks at high speed.[5][6]

Takeshi synchronizes with his opponent's breathing to evade attacks. When Takeshi Yamamoto used this against Genkishi, he also used his three short blades to fly at high speed and almost disappear from sight.

Samidare (五月雨, Samidare?, lit. Early summer rain) is the offensive fifth stance of the Shigure Soen Ryu. The user holds their sword in one hand and slashes at their opponent, but instead of actually attacking, pulls off a feint. The released sword falls to the user's other hand, which is grabbed to create a genuine slash. Samidare catches the opponent off-guard for attempting to dodge the feint attack.[2][3]

This technique was first seen used by Takeshi Yamamoto unsuccessfully against Squalo, who claimed to know all the Shigure Soen Ryu techniques. Yamamoto also used Samidare against Genkishi. Takeshi does a slicing attack while switching the katana between the swing, changing the trajectory and the timing freely..

An unknown form, deduced to be defensive.

Shibuki Ame (繁吹き雨, Shibuki Ame?, lit. Splashing rain) is the defensive seventh form of Shigure Soen Ryu. The user holds their blade backwards and spins it to create a whirlwind-like shield. It is the only form used where the sword is reversed, the sharp edge pointing behind the user.[2][7]

Takeshi Yamamoto uses this against Superbia Squalo during the Rain Ring Battle. Takeshi holds the sword backwards and spins to create a whirlwind like shield.

Shinotsuku Ame (篠突く雨, Shinotsuku Ame?, lit. Pouring rain; pelting rain) is the offensive eighth form of the Shigure Soen Ryu. The user charges and then slashes the sword at the opponent. The blade of the sword cuts around the user, forming a cross slash.[8][7]

This attack was originally created by Tsuyoshi Yamamoto while saving his friend in the middle of a typhoon. While training, Takeshi Yamamoto mentioned that it was the easiest of the eight forms for him to learn, and as a result, uses it far more than any other in the series.

Yamamoto uses Shinotsuku Ame against Superbia Squalo during the Rain Ring Battle. In his battle against Saru, Yamamoto improved the Shinotsuku Ame by surrounding the sword and himself in Rain Flames. Takeshi uses the blade of the sword to cut around the bearer. Takeshi can also use Rain Flames with this move if there's no water. An alternative version was used by Future Takeshi with hot water called Shinotsuku Nettou.

Utsushi Ame (うつし雨, Utsushi Ame?, lit. Duplicate rain) is the offensive ninth form of the Shigure Soen Ryu. It was created by Takeshi Yamamoto. The user slashes upward to create a wave of reflective water, acting as a mirror. When the target is distracted by the reflection, the user strikes from the opposing direction.[8][10]

Yamamoto created this technique during the Rain Ring Battle against Superbia Squalo. He also used this against Genkishi and Reborn. Shinotsuku Ame, however, was countered by Reborn during his Arcobaleno Trial. Takeshi makes a tidal wave with his sword and, while his opponent is distracted by his reflection, he attacks from above.

Scontro di Rondine (, Sukontoro・di・Rōndine (Tsubame Tokkou)?, lit. Swallow suicide attack); in Italian lit. Clash of swallow.) is the offensive tenth form of the Shigure Soen Ryu. The user becomes coated with a large amount of water and Rain Flames. Led by a Rondine di Pioggia, it enables the user to attack with amazing speed and power.[1][11]

Takeshi Yamamoto used this against Genkishi, but failed to discern the illusions. A tidal wave of Rain Flames surrounds him while he charges, led by the Swallow from his Box.

This attack has a strong resemblance to Squalo's Scontro di Squalo, possibly being Yamamoto's source of inspiration for this form.

Beccata di Rondine (, Bekkata・di・Rōndine (Tsubame no Kuchibashi)?, lit. Swallow's beak); in Italian lit. Peck of swallow.) is the offensive eleventh form of the Shigure Soen Ryu. The user rapidly thrusts their sword numerous times towards a target, like a flock of attacking swallows.[1][12]

Takeshi Yamamoto first used this attack against Genkishi, thrusting his blade multiple times with one hand.

This attack has a strong resemblance to Squalo's Zanna di Squalo, possibly being Yamamoto's source of inspiration for this form.

Aggregate Art: Jiunoka (総集奥義：, Soushū Ougi: Jiunoka?, lit. Rainy metamorphosis) is a combination defensive and offensive form of the Shigure Soen Ryu which uses all of the Shigure Soen Ryu's forms up to this point, to strike moving objects. The Tranquility characteristic of the Rain Flame causes the objects hit to slow down.[5][6]

In Yamamoto's fight against Genkishi, he used this technique to slow Genkishi and his Extra Danza Spettro Spada to the point where they appeared to be frozen in place.

Defensive + Offensive. Takeshi combines all his forms to strike moving objects with rain flames, causing them to slow down to the point that they appear to be frozen in place.

Takeshi's special twelfth form has two parts; one offensive and one defensive.

Takeshi uses the Ziro left sword of his Cambio Forma to attack with multiple compressed airwaves which can "Sniff" out an enemy, making this perfect against illusionists.

With Vongola Gear, he uses his left blade, Ziro, to fire multiple compressed airwaves which can cut the enemy into pieces. Even if the attack doesn't hit, it will use the left blade Ziro's ability to "sniff" out the enemy and catch its smell by touching the air, allowing it to instantly remember what the opponent smells like. It is synchronized with Yamamoto, allowing him to see what he's slashed through smell, thus making it impossible for the opponent to hide. Therefore, this is the perfect technique against illusionists.[13]

This form has a strong resemblance to Genkishi's Danza Spettrale Spada. It is quite possible that this is where Takeshi conjured the idea of this form from.

Udachi: Kirisame (左太刀斬雨, Udachi Kirisame?, lit. Right-hand sword sharp rain) is the second part of the special twelfth form of the Shigure Soen Ryu. The follow up to Sadachi: Kirisame, this attack is different in that the waves are shaped like Koziro and can cut the opponent who has been "sniffed" by Ziro.

With Yamamoto's Cambio Forma, he uses his right blade Koziro to fire swallows made out of Rain Flames to impale the enemy. This attack is used right after the use of the left blade Sadachi: Kirisame which allows Yamamoto to see what he's slashed through smell. The fired swallows are synchronized with Yamamoto, allowing them to see what Yamamoto is seeing. In conjunction with Sadachi: Kirisame, it becomes impossible for the opponent to dodge or hide; therefore, this is the perfect attack against any illusionists or other Mist Flame techniques.

This technique was first used against the Demon Spade.[13] 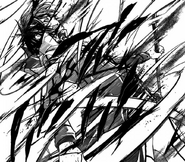 Attacks and Abilities
Community content is available under CC-BY-SA unless otherwise noted.
Advertisement