Ring of the Sky Version X

Ring of the Sky Version X

Chapter 300
The Ring of the Sky Version X is the upgraded Vongola Sky Ring created specifically to suit Tsunayoshi Sawada, and is one of seven Vongola Gear,

Following the destruction of the Original Vongola Rings, Talbot took the Vongola Rings' remains and combined them with the Animal Rings using Primo's blood-- Penalty. The combined form of the three parts resulted in stone ores of each Dying Will Flame of the Sky. And it was by channeling their resolve through the stones that Tsuna and his Guardians transformed the ores into Vongola Gear, personalized for each member.

It is the result of Talbot's work and Tsuna's resolve. The broken pieces of the Vongola Sky Ring was upgraded with Tsuna's Vongola Box Ring, Nuts and Penalty.

The main ring, worn on Tsuna's middle finger, has an X in the middle with the words "Vongola Famiglia" written on it, with Nuts's head at the end of the ring. There is a chain that connects it to another smaller ring, worn on his little finger. This chain-linking is similar to the way that a chain connects Tsuna's X-Gloves Version Vongola Gear, to a buckle on his leg.

The Ring of Sky Version X, as revealed by Talbot, is made exclusively for the Vongola Decimo & Guardians. It took the form of twin rings to best suit Tsuna's fighting style.

Nuts Version X[1] (ナッツ , Nattsu Bājon Ekusu?, lit. Nuts Version X), previously Leone di Cieli ver. Vongola as the Animal Ring, was merged with the Vongola Rings, Nuts is now a part of the Ring of the Sky. However, he can still manifest outside of the ring, like all the other Box Animals.[2]

With the upgrade, Nuts has armor on his legs and is wearing armor with the Vongola Famiglia crest on his forehead. Nuts is capable of merging directly with Tsunayoshi Sawada for the latter's Cambio Forma.

Tsuna's Cambio Forma Version X is formed when Nuts manifests and merges with the Ring of the Sky and his X-Gloves.[3][4]

Rather than a gauntlet in its previous form, the Cambio Forma has now become a pair of arm thrusters attached to Tsuna's X-Gloves V.V.G with extra X emblems and flame designs. Through Cambio Forma Version X, Nuts now merges directly with Tsuna.

The Vongola Gear powers up the combustion of the Flames, making them capable of emitting Flames powerful enough for Tsuna to escape a black hole's magnetism or even destroy one. The arm thrusters can release the Soft Flames, allowing Tsuna to balance enough for him to fire Hard Flames from both of his gloves.

The X-Headphones and Contact Lenses were updated by Spanner and they now have the program for Operation XX, allowing Tsuna to use the XX-Burner. 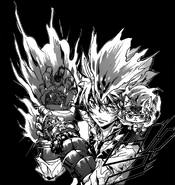