Tsuna defeats Mukuro Rokudo who, along with the rest of his gang, is arrested by the Vindice. During the following days, a swordsman appears and attacks a boy called Basil, who is in Dying Will Mode. The swordsman then attacks Tsuna and his friends when he discovers that they are from the Vongola Famiglia. Dino manages to fend off the swordsman and he reveals to Tsuna that the boy was protecting half of the Vongola Rings, seven items which belong to the Vongola's seven most integral members, the next Vongola Boss, and his Guardians. Reborn tells Tsuna that the Vongola's elite assassination team, the Varia, would come for the rings, so he and the selected six "guardians" and Tsuna himself have to train. Tsuna starts training with Reborn and Basil while Dino decides to teach Hibari, Colonnello with Ryohei, and Yamamoto with his father. Gokudera asks to train with Dr. Shamal, but Shamal decides not to teach him until he learns to prioritize his life first, something Gokudera is unaware of. 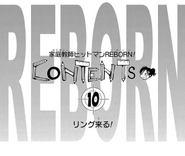 Haru: For our 7th interview, we have the cool and gorgeous Bianchi!

Bianchi: Thank you for coming, Haru. Do you need a love consultation?

Haru: N-no, I'd just like you to tell me about yourself.

Bianchi: Oh... Well, how are things going between you and Tsuna?

Haru: Yeek! Whatta ya mean?! I... Umm... How about your profile? What's your birthday, blood type, height, and so on?

Haru: Oh! So that's why the tattoo on your shoulder is a scorpion!

Haru: Ayee! She even gave her measurements! She really does have good proportions! Oh! I've been given a question--what kind of sister were you for Gokudera when you were kids?

Bianchi: We were the only kids in our house, so we only had each other to play with. It's not like today, when...

Bianchi: This keeps happening. I don't know why he's become so sickly...

Tsuna: Sheesh! She doesn't get that she's why he does this!

Bianchi: Tsuna, fetch water! Haru, get a bucket and a towel!

Tsuna: Uh... Bianchi, maybe you should let someone else look after him...

Haru: Hurry, Tsuna! Oh, I pity the sick, even if they speak ill of me!

Haru: Shall I use this towel?

Tsuna: No! Lambo blows his nose on it! Take this one!

Bianchi: You two act like a married couple. Have you kissed yet?

Bianchi: Reborn!♡ I've decided to whip up some nutritious dishes for these sickly, fainting children.