Reborn is the eponymous character of the Katekyo Hitman Reborn! series. He was sent by Vongola Nono to train Tsunayoshi Sawada to be the next boss of the Vongola Famiglia. Though appearing to be a baby, Reborn holds the title of The World's Strongest Hitman and is the Sun Arcobaleno.

Reborn is a small infant with dark eyes. He is slightly tanned with black spiky hair and thin curly sideburns. His main outfit is an all black suit, with a red long-sleeved shirt, a black necktie, and a black fedora with an orange stripe. Leon, his animal partner, is usually seen resting on the brim of his hat.

Like all Arcobaleno, Reborn has the Yellow Arcobaleno Pacifier on his chest. After his curse is lifted, Reborn loses the pacifier, however, he compensates with a replica pacifier since he could not be at ease without one.[4]

Reborn's true form is a tall and lean man. He wears a yellow long-sleeved shirt instead, and his blazer is changed to a waistcoat in some promotional images. Sometimes, his shadow is in the shape of his original adult form, such as when he first shows up to train Dino or Takeshi Yamamoto.

Reborn has also worn numerous costumes that vary in design and creativity. The costumes are realistic enough to either blend into the surroundings or to disguise into another person entirely.

Confident and unpredictable, Reborn proudly declares his status as the strongest hitman. He remains calm throughout any situation and always puts on a poker face. While he rarely displays genuine anger, he's admitted to having snapped when the Gola Moska was revealed to be carrying Timoteo. He was also enraged when he could only helplessly watch as Tsuna was being beaten up by Demon Spade. Reborn's temper is formidable and intimidating enough that even the normally impassive Cervello has expressed apprehension in response to it.[5]

Reborn is normally mischievous and rather sadistic, earning the "Spartan tutor" nickname from Tsuna. He enjoys pulling pranks, teasing his students, and generally sowing chaos for his own amusement. He also enjoys cosplaying and dressing up for dramatic effect, especially to cause a reaction. Despite his playfulness, as Tsuna's tutor, most of the things he does is for his student's sake. Reborn teaches what he can to make Tsuna a splendid boss.

He's also shown a subtle deterministic side that was only hinted at through the series and it was not until the end that Reborn expressed the extent of his fatalistic thinking.[6] It was revealed in a flashback that Reborn initially showed great anger towards the Arcobaleno Curse. However, after a period of wandering, he came to accept it, and asked Shamal to erase his personal history.[1] Afterwards, he believed that dying as an Arcobaleno was inevitable, and was even resigned to becoming a member of the Vindice, until Tsuna convinced him to fight for otherwise.[6][7]

True to his title, Reborn has exceptional combat abilities and a vast amount of Sun Flames. Even with an infant body, he can easily scale high places and land from them. His physical strength is always demonstrated when he kicks someone into a great distance. Reborn also has sharp reflexes and keen senses, easily blocking attacks from Kyoya Hibari or Colonnello. He can fire a bullet with accuracy within 0.05 seconds.[citation needed] He fired a Dying Will Bullet to Tsuna even when moving fast or obstructed by dust.

Reborn has shown great leadership skills. The people surrounding him, often the Arcobaleno, defer to his cues and his judgment while consulting his opinion. In times of emergency, his orders are solid enough to be respected and followed. 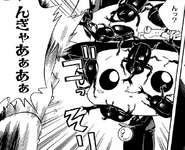 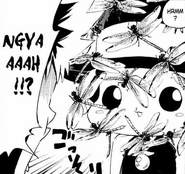 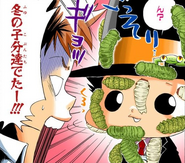