Reborn Wiki
Register
Don't have an account?
Sign In
Advertisement
in: Dying Will Flames of the Sky
English

Dying Will Flames of the Sky

Rain Flame Users
A Rain Flame is one of the types of attributes in the Dying Will Flames of the Sky.

Rain Flames are mostly blue with shimmering particles that seem to "flow" though them, giving them an appearance similar to rippling water. The core is cerulean blue and the outer sections are a lighter tone of blue.

To square away conflict and wash away the blood spilled. The Requiem of Rain.

Mammon on the position of Rain Guardian, Chapter 109, episode 49

Its Tranquility characteristic allows it to weaken anything it touches. It can be used to slow down the opponent's movements or attacks.

It can also negate and cancel out other flames or energy up to a point, as shown when Lal Mirch purges Ginger Bread's Sun Flame spiders from inside her body by showering herself in it, or when Squalo keeps the company safe from Zakuro's lava-like Storm Flames.

One proficient in the usage of the Rain Flame can use its Tranquility characteristic to such a degree that anything entering a certain barrier will be completely immobilized, effectively breaking machines & killing a human by stopping all biological functions.

In the anime, Rain Flames are also able to be frozen just like Sky Flames. 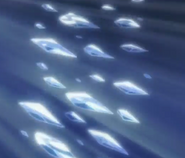