Necklace of the Rain Version X

Chapter 326
The Necklace of the Rain Version X is the upgraded Vongola Rain Ring created specifically to suit Takeshi Yamamoto and is one of seven Vongola Gear.

Following the destruction of the Original Vongola Rings, Talbot took the Vongola Rings' remains and combined them with the Animal Rings and Primo's blood-- Penalty. The combined form of the three parts resulted in stone ores of each Dying Will Flame of the Sky. And it was by channeling their resolve through the stones that Tsuna and his Guardians transformed the ores into Vongola Gear, personalized for each member.

It is the result of Talbot's work and Yamamoto's resolve. The broken pieces of the Vongola Rain Ring was upgraded with Yamamoto's Vongola Box Rings, Koziro and Ziro, and Penalty.

The necklace is shaped like a miniature sword which has the design of Ziro's head on it and a 10th Generation crest.

This necklace, as revealed by Talbot, is made exclusively for the 10th Generation Vongola Family. It took the form of a necklace to best suit Yamamoto's fighting style.

Upon activating his Cambio Forma, Yamamoto gains two swords, along with armor around his wrist, arms, and feet. Yamamoto also dons a traditional Japanese gi and hakama.

Ziro Version X (次郎 , Jirou Bājon Ekusu?) and Koziro Version X (小次郎 , Kojirou Bājon Ekusu?), previously parts of the Rain-attribute Vongola Box Weapon and then Yamamoto's Animal Rings, were merged with the Vongola Rain Ring. Ziro and Koziro are now a part of the Necklace of the Rain. However, they can still manifest outside of the ring, like all the other Box Animals.

Ziro now has the Vongola Famiglia crest on its side and it seems that it has also increased in size. And Koziro turns into the swordsman outfit for Yamamoto and right-hand blade. The blade is used for Yamamoto's Udachi: Kirisame.[1]

Yamamoto's Cambio Forma Version X is formed when Ziro and Koziro manifest and merge with the Necklace of the Rain and Shigure Kintoki.

He gains an additional katana sword, bracers on both of his arms and metal armored sandals. Yamamoto's clothing also changes to a more traditional kendo outfit consisting of a kamishimo and a hakama.

On both of his hips rest sheaths for his two swords. The Necklace of Rain continues to stay around his neck (similar to the way Hibari's Cloud Bracelet remains with him during his Cambio Forma). On the end of the pommel of each sword are figurines of the animals; the left Ziro and the right Koziro.

Finally, as with most of the Vongola Gear, the weapon gains rings of text. Yamamoto's text rings revolve around his sword pommels. The left sword, Ziro's, ability can be utilized through the use of Sadachi: Kirisame, the first offensive twelfth stance of the Shigure Soen Ryu style. The right sword, Koziro, is used for attacking with the second Shigure Soen Ryu offensive twelfth stance, Udachi: Kirisame. 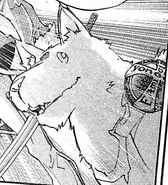