Chapter 1
Namimori Middle School (並盛中学校, Namimori chūgakkō?) is a middle school in Namimori, Japan. It is the primary setting where most of the main events in the Katekyo Hitman Reborn! series occur. Namimori Middle is based on real life middle schools in Japan. Students study for three years, encompassing 7th to 9th grade and is the last instance of compulsory education.

Physical Education is taught by Enomoto (which included swimming class), Mathematics by Dohachiro Nezu, and Homemaking[5][6] & English is temporarily taught by Dino.

As is the general norm for Japanese schools, there are two sets of seasonal school uniforms, for the summer and winter. These uniform changes occur on June 1st and October 1st, regardless of the weather.[14] Namimori Middle follows the Western-influenced blazer style, but when the school first opened they wore the then common, gakuran-style uniform, before switching out. The Disciplinary Committee follows tradition by wearing the old set.[15]

Girls wear a short-sleeved a white blouse, a red bow-tie, and a blue skirt. Boys wear a white button-up shirt, a red or blue tie[16][17] and blue or black trousers. 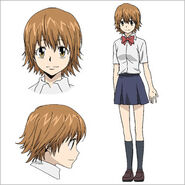 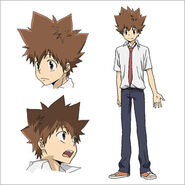 Boys and girls appear to have an optional yellow blazer jacket, presumably for colder weather. It has the middle school's crest emblazoned over the left breast. 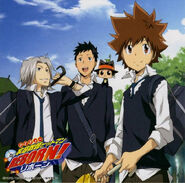 The Disciplinary Committee, the yellow blazer jacket, and vest are replaced by a black gakuran with a red inner lining. They wear black trousers, with the red committee armband pinned to the left sleeve and (excepting the leader) all have pompadour-style hair.

Tetsuya Kusakabe wears a white round-collar shirt under his Gakuran.

Hibari has also been shown wearing a sweater vest with short and long sleeves while foregoing his gakuran jacket. 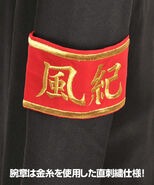 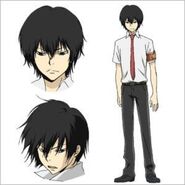 Hibari without the Disciplinary jacket.

Winter uniform. Hibari in a sweater vest with short sleeves. 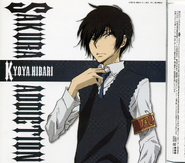 Winter uniform. Hibari in a sweater vest with long sleeves.