Chapter 90
Moska[2] are large, humanoid robotic suits, equipped with state-of-the-art weaponry and firepower. Their heads look like those of actual flies, hence their names.

It's rumored that after a world war the military sold some of their research on destructive weapons on the black market to the mafia.[3] The Moska was originally designed by the Italian military.[1]

Vecchio Moska[1] (Vecchio Mosca, lit. "Old; ancient fly") was the original prototype designed by the Italian military. Ottavio had it built off the designs and incomplete investigative report he'd bought from back-dealing soldiers before the higher-brass found out about them.

The ex-soldiers, in desperation, attempted to take over the guest hall on Mafia Land in order to extort Ottavio, who was in charge of security for an event on the island. At first, he meant to use Vecchio Moska to force the ex-soldiers back but then decided to use it against Xanxus and the other Varia officers when they interfered.

However, as a prototype, Vecchio was imperfect; it's emergency shut down button obviously accessible, which Xanxus was aware of, and Mammon easily turned off. Mammon had returned to Xanxus with the final investigative report for Moska which had been Xanxus' aim all along. He'd use that information to build Gola Moska using the already built Vecchio Moska as a base.[1]

Gola Moska (Italian for Throat Fly or maybe intended as Gluttony Fly) appears to be the second in series of the Moska weapons, weighing 957 kg and having a tall height of 230 cm.[2][4] Originally a weapon designed by the Italian military, it was covered up until the Varia began working on it themselves. The military stopped developing the Moska weapon because it required a human life force that could use a strong Dying Will Flame for its own power.

The Varia owned a prototype of the Gola Moska series that had a deactivation button on its back, as well as an advanced model with no deactivation button. Once the advanced model began attacking, it was believed to be unstoppable. The newest model of the Gola Moska was dressed as an official member of the Varia and was treated as the potential Cloud Guardian for Xanxus's Family. It was, however, quickly defeated by Hibari and lost its right to the ring. Unfortunately, Hibari failed to fully deactivate Gola Moska, and it began to rampage, attacking anything its sensors picked up as alive.

When Tsuna arrived, he was able to overpower the weapon and sliced it in half, revealing the restrained and bloody body of the 9th Vongola Boss. Xanxus used this situation to frame Tsuna; an excuse, and become the 10th Boss with loyalty from the majority of the Vongola Famiglia. Gola Moska, as a Varia member, represents the sin of Gluttony, because Beelzebub, the demon of gluttony, is called the "Lord of the Flies" and takes the form of a giant fly.

Strau Moska are third generation Moska,[5] an upgraded version utilized by the Millefiore ten years into the future. They have the power to sense any type of ring that is uncovered by a Mammon Chain. Which leads to one finding Tsuna, Lal Mirch, and Gokudera when the first and third of them arrive in the future. Four of them were again seen in combat against Tsuna when he split off from the main invasion force to act as a decoy so the rest could make their way to the White Round Machine. They are much larger than their predecessors and are covered with 20,000 layers of nano-skin. Even Tsuna's Zero Point Breakthrough First Edition was only enough to freeze 16,738 layers of it. And as long as the Ingenium core isn't frozen, Strau Moska won't die.

Strau Moska have a curious ability absent in their predecessor. When Spanner calculates the power level of Tsuna after using Zero Point Breakthrough Custom, he estimates him to have increased in power 172%, or 1.7 times and comments that it was high for a human. Two Strau Moska shoot Dying Will Flames at a third and power him up to King Moska status. However, the two Strau Moskas use up all their energy and are unable to fight or use any of its abilities. At this point, it appears that the only difference from an ordinary Strau Moska is increased power.

A miniature version of the Moska. It was created by Spanner to help him with his day-to-day activities. It has a built-in microwave, storage for Spanner's lollipops, and some other features which help serve Spanner's basic needs. It is useful with house chores, it has guns for fingers like the previous Gola Moska, except the Mini Moska fires popcorn. The Mini Moska shows an unusual connection to Spanner, sacrificing itself to ensure Spanner's safety even after Spanner repeatedly ordered it to stop.

Virtual Moska was the Moska used during Tsuna's training in the virtual space Spanner had created. It is only an image; however, when fighting against it in virtual reality, its skills are equal to those of a real Moska or even greater, depending on Spanner's settings. During the fight with Tsuna, Spanner upgraded the Virtual Moska twice by increasing its overall power and by adding more weapons and armor.

After the battle with Byakuran, Spanner traveled to the destroyed Vongola HQ to try and build a Moska to help defeat Byakuran; However, before he could complete it, the Vongola had already defeated Byakuran, making his efforts in vain.

Green Moska (・モスカ, Gurīn Mosuka?)[6] was created by Verde with Spanner and Shoichi Irie and adding his cutting-edge military technology created this super robot. Verde needed to release his curse to use it because the Moska requires a lot of flame energy to work. The Green Moska is equipped with a heat sensor to locate the enemy even if they can warp. Its main weapon is a laser called Sonic Laser. It has a retractable arm called Quick Arm and can use a powerful technique using the Flames of the Sky called Solid State Attribute Flame Blast. 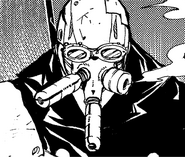 Gold Moska in white from the Character Card Game.