It has two groups of members whose levels of strength vary. The first group's members are dressed in suits and have neat hair. The second group is dressed in a more yakuza-like fashion, looking rougher.

Their leader is Satoshi Nishikawa (西川 智, Nishikawa Satoshi?). Even though he is the leader, he still dresses plainly, e.g. T-shirts.[1] 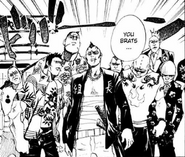