Chapter 106 (mentioned)
Mafia school is a private institution attended by children of the mafia. While it doesn't seem to be compulsory, both Dino and Superbia Squalo were students there for a time.

Dino was made to attend by his father, Cavallone Nono, when he was set to inherit the Cavallone Famiglia. Dino was bullied and had at one point run away.[1]

Dino also met Superbia Squalo at the school, who was known as a prodigious swordsman and graduated or left early.[citation needed]

The boys' uniform consists of a russet-colored blazer with the school emblem stitched over the left breast. A white button-up shirt with a blue tie, and gray window pane check patterned pants.

The official merchandise, drawn in the style of the anime, has Dino and Squalo with a black tie and green colored versions of the pants. 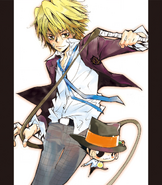 From Katekyo Hitman REBORN! the STAGE.