The Levi Lightning Strike Squad is a strike squad headed by the Lightning Guardian candidate for Varia, Levi A Than.

All members of the squad wear an all-black, leather Varia uniform with a black surgeon's mask. They are agile, easily leaping across buildings, and use electrical equipment to subdue their targets.

Currently, only three members of the squad are known.

After arriving in Japan along with the Varia, the Squad accompanied Levi and Mammon to Namimori to find and defeat the other Half Lightning Vongola Ring holder.

After Mammon used his Thoughtography to find the general area, the Squad set out in search of Lambo. Uno was the first to come upon Lambo, I-Pin, and Futa. On Levi's orders, Uno engaged the children and blocked their path of escape. He swung his Electric Rod and hit Lambo with a bolt of electricity, causing I-Pin to begin fighting him. The battle is skipped over, but he was revealed to be the victor when Futa is running away carrying an unconscious I-Pin. Before he could strike another blow, he was knocked out by a punch from Ryohei Sasagawa.

Due was only seen running through the woods and jumping out over the scene of where Uno had been beaten before being knocked out by a swipe from Yamamoto's Shigure Kintoki.

After both Uno and Due were taken out, Tre attempted to kill Lambo from afar with a charged bolt of electricity. Before he could fire, he was blown up and knocked unconscious by one of Gokudera's dynamites. 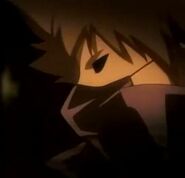