Tsuna and Gokudera manage to defeat the Millefiore soldiers using the energy from the Vongola Ring, and return to the base. Gokudera discovers a letter written by his future self informing them that they can return to the past if they defeat the Millefiore leader, Byakuran. Lal Mirch starts training Tsuna, Gokudera, and Yamamoto, and explains to them that the Mafia rings have the ability to open boxes that can unleash flamed weapons or animals. The next day, Kyoko leaves the hideout to find her brother, causing the others to start looking for her. Kyoko is rescued by the adult version of her friend Hana, who tells her the whereabouts of Ryohei. While searching for Kyoko, Gokudera and Yamamoto are attacked by a Millefiore soldier, Gamma. Even after fighting together, Gokudera and Yamamoto are seriously injured but are saved by an adult Hibari. 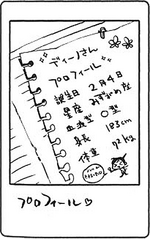 Haru: Today, we have with us Tsuna-san's older brother, the 10th Boss of the Cavallone Family, Dino-san! [* By older brother here, it means Reborn's older student.]

Haru: Hahi-! Thank you very much! I'm... flushing! Erm... Ah, I have many questions coming! First then, Dino-san, what do you do on your off days?

Dino: Ah, yes. I'd drive around, and by some coincidence, I always end up going back to places related to my job. Or, I'd get invited to a party, or call on my little brother here to see how he's doing. I suppose? 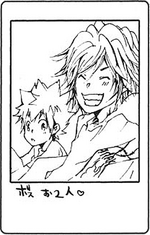 Haru: You mean Tsuna-san, right! Next question. Do you normally visit Hibari-san to play with him?

Dino: Hahaha! If you play with Kyouya, you will definitely need a first-aid kit! Still, I do go and see how he's doing when I pass by.

Haru: I've asked everyone so many times, and it seems Hibari-san is like a really dangerous person, from the way you all speak.

Dino: What, Haru, you don't know anything about how frightening Kyouya can be? This must be because of how well Tsuna has protected you, isn't it? Very impressive, Tsuna! 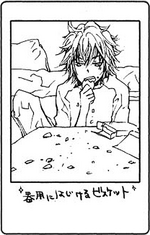 Haru: That's not true! How could you! After Dino-san said such a nice thing and all--! By the way, Dino-san? You've spilt a whole lot of biscuits on the table. Does that way of eating have some purpose? Is it some Italian custom?

Tsuna: I don't think that's it either!

Reborn: Once again, you and your useless way of eating, Greenhorn Dino. 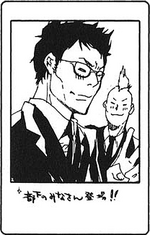 Reborn: Ciaossu! I'm here to talk about your greenhorn days.

Dino: Oi, Reborn! You're doing that just to embarrass me, aren't you?

Reborn: You can try and stop me, of course.

Tsuna: What do you mean by that!

Reborn: When it comes to these old stories, there are other guys too. 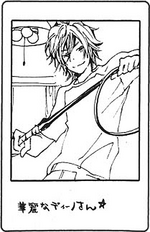 Dino: Y-you bastards! I didn't call you to come here, did I?

Romario: Mr. Reborn called us here! Because we were companions who brought you up together, Boss.

Dino: Oh? In that case, I will definitely put a stop to your old stories now! Let's go.

Tsuna: Incredible-! With he's in front of his men, he becomes super strong!

Haru: Hahi-! There are so many mysteries in the mafia world. Well, since I'm going to be his wife, I will have to work hard at getting used to them too! That's all for now~ <3