Dying Will Flames of the Earth

Adelheid Suzuki
A Glacier Flame is one of the type of flames of the Dying Will Flames of the Earth.

Glacier Flames appear as numerous ice shards, which, upon contact with water, instantly freezes it. Usually, the user needs a source of water in order to use this Flame to its full capabilities. It can also be noted that Glacier Flame users themselves do not have to physically touch the water source to which they create their Flames from. The glacial ice generated by the user can also be manipulated and molded. However, if there is no nearby source of water, the user is also able to instead release the flame and launch the deadly glacial ice shards towards their opponents, which itself can cause tremendous damage.

The actual ice generated by Glacier Flames have more traits in common with diamond than ice, as it is the most defensive Flame shown so far. This implies that the characteristic of the flame fortifies water rather than simply freezing it. Despite this, the ice created can be worn down through high level combination attacks and is not as hard if attacked from the interior. 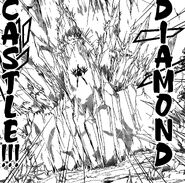 Diamond Castle, a sturdy fortress made out of transformed water.
Add a photo to this gallery