Chapter 87 (mentioned)
Chapter 158
Fabio[1] is the seventh generation boss of the Vongola Famiglia, inherited from Simora. His name was briefly seen on a Vongola family tree shown by Reborn, shown to be the father of Daniela, Vongola Ottavo.

Fabio's most noticeable characteristic amongst the ten Vongola bosses is his tall black hat. He wears a black suit with a white dress shirt. He has a mustache.

Fabio, along with the other Vongola Bosses, manifested during Tsuna's Vongola Trial. After Vongola Primo accepted Tsuna's resolve, the latter was granted new gloves.

It was said that he had the weakest Flame out of all the Vongola Bosses, and because of this, he created the first Dying Will Gun.[2]

Tsuna's Vongola Trial in the anime.

Tsuna's Vongola Trial in the manga.

Fabio in one of the covers of Chapter 409. 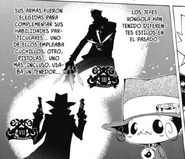