Chapter 334
Demon Spade's Deck of Cards is one of Demon Spade's many weapons. On the back of the card is present a pattern with a D in the center. Once activated, these cards take the forms of people who are close to the enemy to make use of any emotional attachments. They also take the form that the user has seen and feels most threatened by, as seen when the Fran from ten years later was summoned to fight Mukuro instead of the present Fran.

These "characters" that are formed by the cards are able to use any ability or skill that the original has, and even takes up their personality.

Demon has been shown to be able to slip into one of the "characters" and attack the enemy himself.

After Demon took control of Mukuro's body, he gained the additional ability to send his enemies into an illusionary world which he controls through these cards.

When Demon first used this ability, it caused an explosion with the joker card in order to suck his enemies in through the explosion. However, when used against Hibari, the cards changed into a bigger form and Hibari simply got sucked into it, showing that an explosion isn't always necessary. 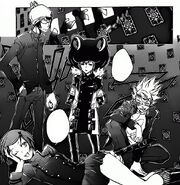 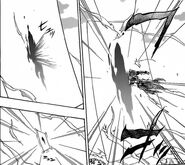