Vongola Decimo & Guardians, Xanxus
Cambio Forma is an ability exclusive to the Animal-type Box Weapons of the Vongola Famiglia. Upon shouting "Cambio Forma", the Box Weapon either merges with the user's equipment or becomes a new set of equipment entirely, greatly increasing their power.

The Vongola Box Weapons are transformed into equipment inspired by the first generation Vongola Guardians, each bearing the Roman Numeral "I".

The Varia, or at least Xanxus' Box Animal from 10-years-later was recreated in the present as Armatura di Platino Ligre Tempesta di Cieli, nicknamed Bester. It resides in Xanxus' newly improved Varia Ring and has the same ability to Cambio Forma. Bester manifests and merges with Xanxus' pair of Dying Will Guns and gains the ability to shoot bullets in the shape of a liger. 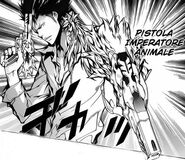