Chapter 10
Bianchi's Father is the father of Bianchi and her younger half-brother Gokudera Hayato. He's the boss of a famiglia with at least 100 men.[1]

In the anime most noticeable feature is perhaps his rather large, dark mustache. His hair is short and dark with a widow's peak, and his eyes are also dark. Like most mafiosi, he wears a simple yet formal combination of suit, undershirt, and tie.

In the manga, he is shown to be tall and lean, with dark hair. He's only been seen wearing pinstriped suits. [2][3]

He is the current boss of an unnamed Mafia family. He had a daughter, Bianchi, with his wife. At some point, he met Lavina, a pianist, and fell in love with her. The two began having an affair and conceived Gokudera. It was rumored that later on in the affair, he didn't love Lavina anymore and later had her "taken out," but Bianchi's future self said otherwise.

After the final battle against Byakuran, Bianchi tells Gokudera that their father wanted to marry Lavina but was constantly rejected no matter how many love letters he sent her until her death, which was actually caused by her illness; however, before Gokudera's full reaction could be shown, Spanner's Anti-Byakuran Mosca crashes into Bianchi and Gokudera's discussion.

Gokudera's memories of his childhood have shown that his father was supportive of his pianist skills, albeit in a rather unorthodox and inconsiderate manner (getting Bianchi to feed him poisoned food instead of taking his health into account). However, in later years their father-son relationship became very strained as a result of Lavina's death, which Gokudera believes his father directly caused. After finding out that he had been lied to about Lavina's background (being led to believe that she was just a piano teacher who had no relation to him), Gokudera ran away from home and became a deeply unhappy person who was often mistreated by the families he worked for. Shamal eventually became a father figure for Gokudera, implying that Gokudera has become completely estranged from his biological father. However, according to Bianchi, their father does love him.

In the future, Bianchi seems to want her brother to forgive their father or at least realize that he is loved by both his parents. On their father's orders, she often fed Gokudera her Poison Cooking so that he would continue his "abstract" playing. This has resulted in Gokudera feeling nauseous when he sees her face. She later begins weairng goggles to help him overcome his nausea. She is fully aware of their father's past involvement with Lavina and how it has affected Gokudera. Before Gokudera returns to the present, she takes it upon herself to find the love letters their father wrote to Lavina and has faith that he never intended to eliminate his mistress.

Considering that he wanted to marry Lavina, it is likely that he did not love his legal wife, or at least loved Lavina more. But after Lavina's death, they presumably remained married and Gokudera was passed off as her son because the children of mistresses are frowned upon in the mafia.

He seems to have felt deep and genuine love for her. According to Reborn, he fell for her at first sight while watching her perform in a concert hall. He and his subordinates then traced her to a pub where she entertained the diners. His subordinates scared off the diners and she gave him a solo performance, after which he presented her with a bouquet of roses. They began an affair and she is implied to have fallen pregnant very soon afterwards, considering that she gave birth to Gokudera a mere nine months later.

Due to the mafia's rules about illegitimate children, she was only allowed to visit Gokudera a few times every year and had to pose as a piano teacher. Her lover was willing to divorce his wife so he could marry her, and wrote her dozens of letters in an attempt to convince her. However, her illness prevented her from accepting his proposal. After her death, he grew more distant from their son, to the extent that Gokudera had to find out from Bianchi that Lavina wasn't murdered by his subordinates. 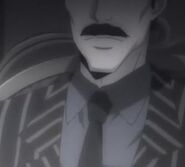 Wondering where Hayato's run off to the first time around.